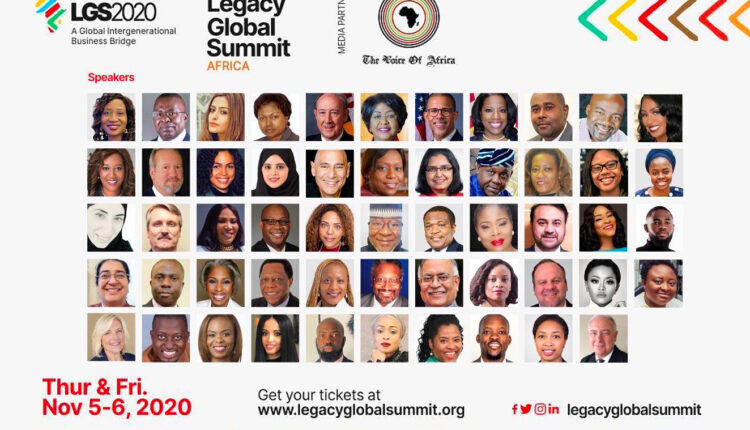 The premier Legacy Global Summit 2020 organized by the Legacy Premier Foundation on Thursday November 5, 2020 and Friday November 6, 2020, hosted business personalities, investors, educators, and other stakeholders for a two-day conference of learning and global engagement. With the objective of becoming an avenue to empower African businesses by providing them with business-scaling opportunities, the Summit, sought to merge entrepreneurs and government agencies looking to access capital and investment deals, bringing different personalities together to achieve this merit. The Voice of Africa was privileged to be the main media partner of the summit.

The virtual event, which was held on zoom, had in representation participants from six (6) continents across the globe who were addressed by 54 speakers, panellists and moderators.

Dr. Remi Duyile gave a resounding opening stating the need now more than ever ‘to embrace the strength of intergenerational collaboration.’ She stated that the systems of the future will be spearheaded by the youth today. Highlighting the fact that with about 11 million youth, people expected to enter the labour market each year for the next decade, the African population has the key to unlocking the potential of the continent in the near future. She stated emphatically the need to start building bridges and walk together to provide opportunities for the coming generation.

The Summit kicked off with an orientation for attendees and panellists of the teleconferencing platform which was quickly followed with pre-event networking facilitated by Dr. Richard Kaye of CEO Space. The first panel session, moderated by Brian Castleberry, the Middle East, Africa & India Office of International Investment and Trade, was themed ‘Doing Business in the UAE.’ The panellists were Sheikha Abdulla AlNuaimi and Arshi Zaveri.

Speaking on the business terrain in the UAE, both Sheikha and Arshi highlighted the fact that there are zero barriers to foreign investments from diverse sectors: technology, finance, banking, logistics, free trade, and even agriculture. Citing that the creation of the free trade zone has become one of the biggest drivers for business growth in the UAE.

The second panel themed ‘Access to Capital’ was moderated by Jeannine Scott, the Founder and Principal of America to Africa Consulting, LLC (A2A).In the panel for the discussion were: Alan Beard, Roshanda Johnson, Brian Castleberry, Nicole Woods, and Femi Akinrebiyo.

The discussion addressed pertinent issues such as ‘SME challenges when it comes to accessing external capital.’ Key among the many was the quality of their financial statements. The point was made clear that this is always going to be the starting point for any financial investment consideration and thus SMEs should invest in keeping quality financial records. From the discussion, what stands true is that there are really good ideas that need investments and money sitting elsewhere looking for good ideas; to bridge the gap, entrepreneurs should know where to go and which ideas that such financing institutions deal in. Capacity building should also be a key focus for these businesses in order to measure up to the requirements of financing institutions.

It was in order following the discussion on ‘gaining access to capital’ for Max Sutherland, President and CEO, World Trade Centre, Atlanta, to speak on how businesses can scale and attract or connect with technical partners. He stated that businesses should work with reputable and certified brands as technical partners for growth. And cited the World Trade Centre Atlanta Academy as one such avenue that will provide end to end, practical programme that helps executives and entrepreneurs, through the process of launching or expanding into a foreign market. He stated that it is extremely important for businesses seeking capital to be extremely prepared; that is, have your strategic plan, business plan, know the regulations of the market you operate in, understand your pricing and know which strategy will penetrate the market, you have to understand your packaging, your target market, among many others he cited.

H.E. Amb. Dr. Arikana Chihombori-Quao delivered an invigorating speech on ‘The Diaspora commitment towards investment in Africa.’ While Africa has all the resources needed and human capital, the diaspora is needed in the continent. We need to strengthen our collaborations for growth. We have to realize that our strength is in our unity. She commended platforms as the LGS Summit which provides the avenue for strategic discussions that can advance the African continent.

An insightful question came in from the participants and it was: ‘How will Africa still benefit from remittances from the diaspora if the diaspora were to move to Africa to help with the continent’s development?’

To which Dr. Arikana answered that those in the diaspora have the opportunity to have a global view of the world. And thus, can pull resources together to make direct investments towards developmental projects in the continent. She highlighted that the diaspora has to make Africa its priority and make savings towards investment in Africa.

The fourth panel closed the session for Thursday with ‘Public-private-partnership: A Fundamental Key to Developmental Growth’ and was moderated by the Principal of the SJS Law Firm Shavon Smith. The panel rounded off with a brief on ‘Wealth creation as a tool for economic growth’ by Honorable Delegate Darryl Barnes and the closing recap was delivered by Dr. Wendy Brisley, the Executive Director at M3Linked.

Special remarks were delivered by the Secretary of State of Maryland, John C. Wobensmith, the State Attorney for Prince George’s County, Aisha N. Braveboy, the U.S. Representative for Maryland’s 4th Congressional District, Congressman Anthony Brown and Honorable Darryl Barnes, the Representative of the 25th Legislative District in the Maryland House of Delegates.

Guest Speaker Otunba Bimbola Ashiru, former Commissioner of Commerce and Indusry and Director of O’DUA Investment Company Limited kicked off the second day of the Summit with a brief on ‘A Sustainable Ecosystem for African Businesses’. Dr. Menna Demmesie, the Senior Vice President of Policy Analysis and Research of the Congressional Black Caucus Foundation followed with a talk on ‘Leverage Strategy and Policy making for International Trade Relations for Economic Growth’.

She highlighted the essence of leverage strategy and cited practical examples of it at play in globally and in Africa:

“Leverage politics in the global trade elite arena allows us to better understand the power and influence of entities like ECOWAS, China and Africa cooperation, or policy initiatives like AGOA and Power Africa and of course more recently, the African Union brokering, what will be the largest free trade area and agreement in the world with the African continental free trade agreement, which will connect 1.3 billion people across 55 countries with a combined GDP valued at almost $3.4 trillion, and the World Bank has estimated that by 2035. This continental African trade agreement has the ability to revolutionise the lives of African people. This is definitely a major shift in the global trade arena, and it demonstrates the power of not only leverage but also group strategy.”

The panel discussion titled ‘Going Global: Understanding International Trade and Development’ saw discussions about the relevant stakeholders’ businesses have to consult in order to legally stage a global presence for their businesses. As well as other business structuring and fine-tuning to get themselves ready for the global market. There was a session on ‘Women Empowerment through Trade and Investment’ which had Toyin Sanni, CEO, Emerging Africa Capital speaking insightfully on.

Victory Oluwasegun, CIO of Jamborow and COO/Co-founder of SpringPort Technologies moderated a session on ‘Generational Bridge-Building for Emerging Leaders and Entrepreneurs’ to which Josephine Agbeko, Dayo Israel, and Lara Abiona threw in their weight. Knowing their years in public service, jobs creation, leadership and entrepreneurship, it was without doubt they were going to hit the nail right on the head on this pertinent topic.

The two-day event was concluded with an award session, launch of the ‘Legacy Colossus Coaching for Women’ as well as the ‘Legacy Global Network’. These groups are intended to keep the flame that has been ignited by this maiden summit alive to propel global entrepreneurs and emerging leaders to unimaginable heights.

The Voice of Africa 21 posts 0 comments