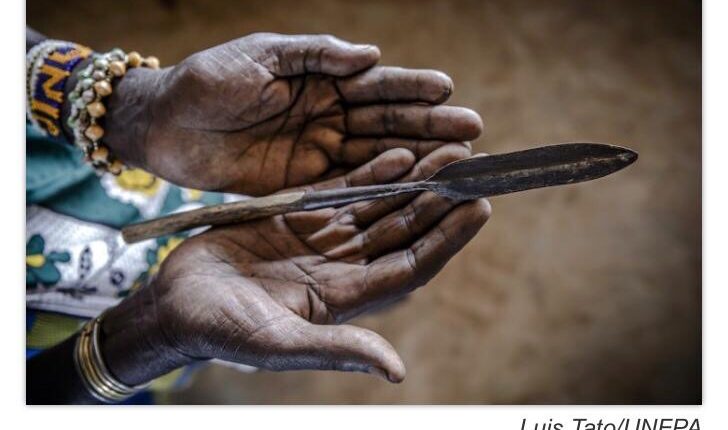 Somalia has one of the highest rates of Female Genital Mutilation (FGM) in the world. According to the latest Somalia Health and Demographic Survey, 99 percent of women between the ages of 15 and 49 have been subjected to this extremely harmful and unacceptable practice.

“FGM is a harmful practice that scars girls and women and endangers their health for life depriving them of their rights and denying them the chance to reach their full potential”, NFPA Representative for Somalia Anders Thomsen said.

I would like to reiterate the call on the Government of Somalia to pass the zero tolerance for FGM legislation and the Sexual Offenses Bill to act expeditiously to end the practice and protect the rights of girls and women. There are various forms of FGM practiced and two out of three Somali women have undergone the most extreme type of FGM called pharaonic or infibulation.

Girls as young as five years old are subjected to FGM without a choice and it is a clear violation of their protection rights”, said Jesper Moller, UNICEF Deputy Representative in Somalia.

“We must collectively renew our commitment to ending this harmful practice and work with all stakeholders to change attitudes so that the next generation of girls can live healthier lives”.

There are many reasons that FGM is almost universally practiced in Somalia including the fact that many religious and community leaders encourage the practice, wrongly justifying it as a religious necessity. Families also view cutting as a way of protecting their daughter’s chastity and that is a prerequisite for marriage.

Through a variety of programmes, UNICEF and UNFPA are working with communities to change those attitudes and educate families on the life-threatening consequences of forcing young girls to undergo FGM. However, alongside those efforts to change traditional beliefs, it is also critical that the Government of Somalia take action to eliminate this abhorrent practice.

Therefore, on International Day of Zero Tolerance for FGM, UNICEF and UNFPA call on the Government to revive efforts for passage of the FGM Bill which has been stuck in the legislative process for several years.

Providing a legal framework which bans FGM will empower families and communities to stand firm and refuse to let their daughters be cut, putting an end to this gross violation human rights.