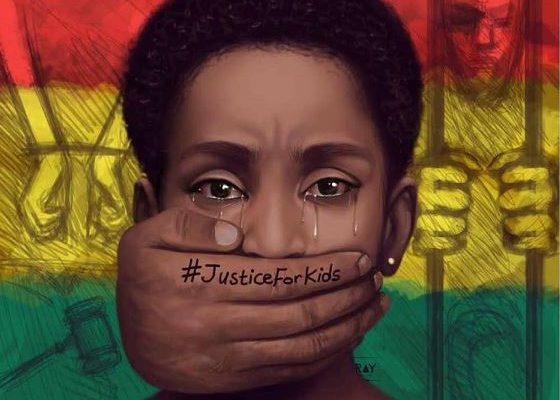 In Ghana, when a woman of not less than sixteen years of age is raped, the first prescribed step, by law, is to report the fact to the police. When this report is lodged at the police station, the ‘particulars’ of the victim are taken, and the victim is issued a form to undertake a medical examination at a fee. This is a procedure that takes less than fifteen minutes, if the police station is not manned by officers who think essential questions to be asked include the victim’s outfit or reason for being out at a certain time and place.

The medical report, if the victim is able to afford and procure one successfully, should eventually play a key part in the prosecution of the rapist. The criminal justice system affords every criminal a certain amount of protection by leaving pronouncements of guilt solely to the Courts. Presumption of innocence, we call it, even if the rapist was caught in the act. Fair play. I mean, considering that criminal cases in a common law system such as ours require the employment of virtually the entirety of state machinery in the pursuit of justice, it is only fair that the accused be presumed innocent. That is, until prosecution successfully discharges the burden of proof which lies on them to prove without reasonable doubt the crime they accuse the suspect of having committed.

However, the medical report sometimes does not play any part in the prosecution of the rapist, much less an important one. This is not because it becomes redundant at any point – it’s simply because, by some design, the report and subsequent apprehension of the accused sometimes do not culminate in a trial. It might sound as if prosecutors have some leeway in the prosecution of alleged rapists, and the decision of whether or not to try them is made on a whim – that is because they do. What else can you expect from a justice system that’s not actually interested in justice?

In cases where the medical report is rendered its rightful role as a key element in the prosecution of the rapist, it serves as evidence that corroborates the claims against the accused person. Progress, right? Well, when you consider just how long it takes to produce this report, you might change your mind.. Although the report is required to prove penile penetration of the victim’s vagina, an essential component in proving rape, the process to produce it is riddled with so much of what seems to be a lack of sympathy for the victim and a lack of serious intent to punish the accused, if found guilty. We aren’t entirely wrong when we call the justice system broken on the back of these observations. How else do you describe a system that is full of delays in the provision of evidence as key as a medical report? Or one that hampers the expedition of the justice procedure with countless adjournments and forces the victim to recall the incident and testify before her accused violator in a courtroom full of people?

On the rare occasion where the roadmap from police report to conviction is followed to its very end, a suspect, if pronounced guilty, is sentenced to not less than five years and not more than twenty-five years in prison. When put into perspective, one can easily see how the gravity of rape pales in comparison to that of other crimes; the use and handling of narcotics, for example, carries a sentence of not less than ten years upon conviction. Clearly, rape is not regarded as very serious in our part of the world at all, especially when you consider the small number of rape cases that are actually followed through to the end. In fact, sexual assault in general has been described before as the most underreported violent crime in Ghana. Will we ever see progress if we refuse to take rape as seriously as it deserves?