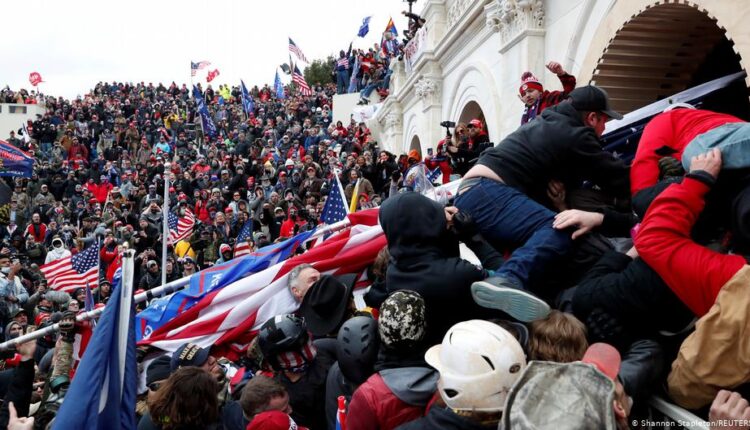 “I want no violence,” Trump said as he plainly threatened more.

In his first public appearance since he incited a seditious mob that violently and illegally attempted to seize power from a coequal branch of government and overturn the results of a free and fair election, President Donald Trump showed no remorse and instead expressed dismay that he’s facing impeachment over it.

While speaking to reporters Tuesday, Trump did not respond to questions about whether he would resign. Instead, citing no one, the president claimed that his speech before the riots “has been analyzed, and people thought that what I said was totally appropriate.”

Trump, who took the stage last week after his personal attorney Rudy Giuliani called for “trial by combat,” said “fight” or “fighting” at least 20 times in that speech. Near the end of the fiery, defiant and falsehood-filled tirade, Trump clearly instructed the crowd to “walk down Pennsylvania Avenue,” seek out “the weak [Republicans]” and “take back our country.”

Trump was reportedly “delighted” as he watched the carnage on television from the White House.

Reuters photojournalist Jim Bourg, who was at the Capitol that day, said he heard “at least 3 different rioters at the Capitol say they hoped to find Vice President Mike Pence and execute him.” The mob killed five people, including U.S. Capitol Police Officer Brian Sicknick, who was beaten to death with a fire extinguisher.

Seeking to distance himself from responsibility, Trump repeatedly told reporters Tuesday that he “wanted no violence.” However, pro-Trump extremists are plotting violence across the country ahead of President-elect Joe Biden’s inauguration.

Trump called his likely second impeachment, which is set for a House vote as early as Wednesday, “a witch hunt” and “a really terrible thing,” and accused House Speaker Nancy Pelosi (D-Calif.) and Senate Minority Leader Chuck Schumer (D-N.Y.) of “causing tremendous danger to our country.”