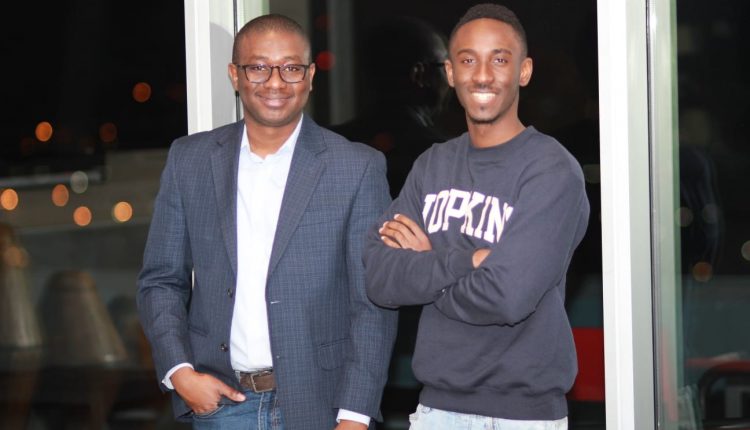 The John Hopkins Carey Business School Africa Business Club (ABC) on January 24 to 25, 2020 held its first flagship event at the Johns Hopkins Carey Business School, Harbor East, Maryland. The event had very prominent Africans in key sectors of the global economy and business speak on various topical issues under the theme: “Africa’s Place in an Increasingly Global Network.” We had the opportunity to sit with the brains behind the conference that is set to shape the future of business on the African continent: Ernest Nyarko and Mahamed Konfrou.

Can you kindly introduce yourselves?

Ernest: I’m Ernest Nyarko from Ghana. I was in Ghana for quite a while up till the 12th grade. I left for Canada to study at the University of Toronto where I pursued Management and Marketing. It was a great experience because it really got me thinking about how to communicate ideas to decision makers. I got the opportunity to work with the Royal Bank of Canada, Johnson and Johnson and Nestle in a variety of roles spanning finance to brand management. These roles helped me to understand what decision makers care about. From there I decided it was time to come and get my MBA. Out of a few options, I chose the MBA at Johns Hopkins because I believed in their value of business with humanity in mind. It’s a value that highlights an unwavering commitment to the fact that at the core business is a series of human interactions that we need to respect. We need to remember that humans are at the center of these key decisions that we are making.

How about you, Mahamed?

Mahamed: I was born and raised in Mali. I moved to the US in 2005 to school at Stevenson University. I got my undergraduate and Masters in Business Information systems. After I graduated, I started working in a mid-tier consulting firm and moved to KPMG, where I spent 5 years in technology consulting. More recently I joined JP Morgan, where I work now in the Internal Control department. While I was working, I developed a passion for giving back to the community. And through friends, I got hooked up with the Malian Association of Baltimore. I had the opportunity to be the president of that community for 2 years which made me see what it is like to be a community leader and to see if it was a fit for me. I developed a deep passion, especially for issues regarding Mali and Africa in general. That passion kind of led me to get my MBA. I figured I needed to get additional skills, especially in management and finance, to be able to give back in some way to my country and the rest of Africa. I also explored different schools. I settled on John Hopkins because it’s local and they have a stellar program around business with humanity in mind which aligns with my goal.

How did you meet each other?

Ernest: This story really starts with one of our mutual connections here, Joel Igu. Being at John Hopkins, I started to realize that there was an underbelly, a lack of coverage of the realitiesl and the opportunities that Africa holds; that Africa is going to be a place that all the business leaders are going to want to be very soon. And so, I had spoken to a bunch of different people about the fact that I want to start a club. One day, I was on my way to the office after a class in the fall of my first year and I met Joel Igu on my way – he has now graduated from the MBA program. He told me about his idea for a club to get Africans together to form a club. I got on board the same day. We had a meeting with people of similar ilk. That was where I met Mahamed. So, it was Mahamed, myself, Joel Igu and Seyi and the Africa Business Club at Hopkins was born. The rest is history.

The African Business club, is it something that goes on in other universities? or did you start this yourselves?

Mahamed: A lot of top business schools have what they call the Africa Business Club. We just brought it to Hopkins.

This is your first year, how has it been?

Ernest: To answer that we have to start from why the Africa Business Club exists. The Africa Business Club exists to raise awareness about the deep potential that exists: doing business and pursuing careers in Africa. Raising that as something that people, this side of the world, should be aware of. On the flip side, it exists to create a platform, an avenue, an engine whatever you’d call it to get people to come together to transform conversations into actions about Africa. The flagship event we had this year is the Africa Business Conference. This year the conference sought to bring people from the diaspora and from the African continent together to discuss topical issues that affect Africans and African business. It discussed healthcare innovation, energy and infrastructure, Afro-Tech, Africa-China relations, topics that determine how business leaders will succeed over the next decade. This is something that the business curricula at various institutions cannot choose to ignore because if you’re looking at where the next emerging market is and how to win in these markets, we have to be talking about the rapid growth that we are seeing on the continent. There are challenges but there are also opportunities. What we realized at the conference is that people want to talk about these things and the conference is just a platform for them to do that. It was tough putting on the conference. We had to get a lot of business leaders, policy shapers, professionals and students together, work through the obstacles that exist within the Hopkins system. All to say that Hopkins has been very supportive in all this along with our sponsors, the Johns Hopkins Center for African Studies, RnD Associates – all big supportive partners.

Are you planning to make this an annual event?

Mahamed: Yes, our hope is to make the Conference an annual activity. And we plan to add a new element to it each year. Something we are thinking of for subsequent events; a case competition, a career fair to bring African start-ups, companies here and connect them with all the opportunities that are available not only at Johns Hopkins but in the US and try to mentor them to be the next leaders in Africa. I know that is an ambitious goal.

The current theme is on how you can change the mindset of Africans: by what ways can we alleviate that mindset of dependence on help from European countries?

Ernest: For us, It all starts with getting the right thought leaders into a room. Things like the Africa Business Club at Hopkins, try to do just that. We try to get people into a room who are thinking about things in a way that we think will push Africa and business on the continent forward. And we are letting people go a step further by not just being aware of these things but to think of how to take actions that effect the necessary change. We plan to at some stage extend the event to Africa maybe Ghana, maybe Nigeria, we’ll see. I believe we can change the minds of people to get them thinking that, “yes we can attain success through our own efforts.” We don’t want to downplay the advantages of partnership with all the relevant players because we learn from globalization. As we learnt at this year’s conference, that’s a collective effort.

If there is single thing that made the most impression on you at the event, what will it be?

Mahamed: Well, there were a lot of great panelists. We give all of them shout outs. The keynote was fantastic, Dr. Eleni, one of the quotes we got from her was that, “Once in a while an idea becomes a company that can change the world.” That was very profound.

Ernest: And one thing that particularly struck me from the Afro-Tech panel was a quote by Yaw Owusu-Boahen, Cofounder of LMNS. He said that, “the businesses that succeed are the businesses that execute ideas the best.” What we want is for people to have the skills to take ideas from point A to point B. Because in this rapidly evolving global economy that we’re in, if you have only the idea you get left behind. You have to have the idea and the team or skill that takes it from point A to point B.

Mahamed: I think it’s also important during the conference that not only the panelists contributed but the participants. There were a number of people who made excellent contributions.

Do you have any plans for after Johns Hopkins?

Ernest: I am actually wrapping up. I should be done with my MBA by early March. We are looking to keep everybody who has touched the ABC, in some capacity, on board for as long as possible. This is because the people who’ve touched the initial idea, we believe, have the strongest sense of where the ABC has to go. I will be moving back to Toronto, Canada to join Deloitte as a Management Consultant in September. Prior to that, it will just be the beach and sunshine.

Mahamed: I wish I could say the same but unfortunately, I still have two years to go. I take courses part-time and work during the day. So, I’m taking my time with the program and once I’m done, I’ll just take a decision from there.

If there is one thing you would change about the event what will it be?

Ernest: That’s a tough one. It’s a tough one because getting the right mix of elements to bring to, if we can call it a new market, is always tough. We had to do our due diligence, understand what the market needed and ensure that there is a clear demand for a lot different things relative to African business across Hopkins. One of the things that we really tried to bring but we couldn’t quite this year, was as Mahamed mentioned, the case competition. One thing that we think is very near and dear to business students’ hearts is to not just to compete but to collaborate. To bring the very best of ideas and the best execution of ideas to reality

Thank you, guys, for your time.

Mahamed: Thank you very much. This was great. I wish you guys success. It is good to see young African entrepreneurs. This is all part of the ABC’s vision.

Ernest: At this point, Mahamed will be taking over the reins of the club officially as President of the Africa Business Club while I step into the background to let him push the club in the right direction. I look forward to how that unfolds. I plan to stay in touch with the ABC.